Artist Statement and Descriptions of Work with Examples

My painting has evolved over the years, from an impressionistic, representative style, to a synthesis of abstraction and figuration, with occasional dips into pure abstraction.  I use abstraction to convey mood, tensions and feelings through colour, the material and form of paint on canvas or paper. Colour has always been extremely important to me.  It was in my studio in Edinburgh, that I developed my own particular ‘voice’ in painting. I like to make a satisfying synthesis between abstraction and figuration, placing narrative skills like drawing within a more or less abstract structure- often a kind of loose grid.

A recurrent theme is landscape or birds and animals under threat because I care so much about conservation of the environment and reducing pollution in all its insidious forms and because I love being ‘close to Nature’ as the Greeks say. This means literally being out in the countryside but also conveys that ancient sense of holding nature sacred.  A desire for reverence towards the earth and its manifestations of life is at the heart of my work.

‘The Bay’ is a picture of an idyllic gulf which lies over an earthquake fault line, so it is threatened not only by man-made pollution, but by natural factors too.  Yet, at the moment it still seems a place of mostly unspoiled Greek beauty and tranquillity. However, we know there has been degradation of all sea water and sea life; also there has been destruction of the trees and wildlife through fire and soil erosion in these coastal areas. So what lies beneath the surface? 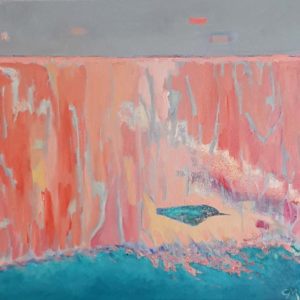 ‘Requiem for a Kingfisher’      oil painting on box canvas

The dripped lines resulting from my initial process of painting also take on a symbolic meaning: that of the values and prejudices that are built into our vision of life, acting as a framework to understanding but also as limitation. Recently the desire to overpaint the dripped boundaries with a unifying colour has come to the fore, as in ‘Requiem for a Kingfisher’.

In ‘Flowering‘ between the profiles of the couple I have drawn a plant, whose leaves and flowers fit perfectly the space,  reflecting their harmony with nature at this point. It symbolizes both the flowering of their relationship and their part in the natural scheme of life. It is influenced by ancient Greek pottery drawing.Reflections on  life are reproduced metaphorically in my painting, showing  relationships between subject matter, even if the subject is not obvious as in abstract work.